My last quick post was just to let you know about my crash, but now I’m further into the story and have a bit to tell you. First more pictures: 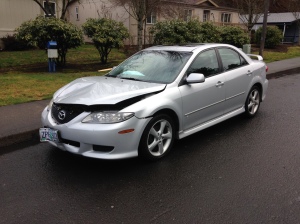 The accident began a stress filled week for me! I took a week of my vacation, and cancelled my birthday party because the snow was so bad. (You can look at my previous post for the photo I took at the crash sight in the snow.) So for the whole week I was carless except when my husband took time off from work to drive me to my appointments. We found out we didn’t have car rental coverage, and there was some question about the other driver’s coverage at the time of the accident. On top of this it was my husband’s “meetings week” which meant 3 out of the 5 weeknights he had meetings and wouldn’t be home ’til late. My husband was my hero, taking care of most everything except my having to talk to the insurance companies about the accident. Please forgive me as I jump around on this as I try and process all that happened. Anyway, my drivers license was due to expire on my birthday, so this is how it went:

February 7, 2014 – Friday night about 8:20 pm I was waiting for an oncoming vehicle before I turned left onto the street where I live. I was headed home after work and my husband was going to be coming home a few minutes after me. The snow was packed on the street and the other vehicle was on a downhill slope when he lost control and crashed into my car. 😦 Both front airbags deployed and I lost sight of what was happening but could feel the car spinning. I ended up facing the opposite direction fortunately on the side of the road. I was pretty shook up and my nose felt like someone had punched me and my hand hurt, later I discovered my forearm was very bruised. But I was all in one piece.

February 9, 2014 – Sunday we were supposed to have the family out for my birthday dinner, but we cancelled because it was still dangerous to drive.

February 10, 2014 – Monday my husband had to take me in to renew my license and file the accident report. I noticed I was often on the verge of anxiety attacks or crying spells.

February 11, 2014 – Tuesday I turned 56 years old and couldn’t go out to shop or anything so I called my best friend and she came down and visited with me. I started seeing floaters in my right eye and thought I was getting a migraine. I hadn’t decided to go into see a doctor until this happened.

February 12, 2014 – Wednesday I went in to the doctor’s office and approved taking additional anti-depressants and was referred to an ophthalmologist.

February 14, 2014 – Friday I went to the ophthalmologist and confirmed the  floaters probably resulted from the impact with the airbag.

This is a 2014 Chevy Spark EV, totally electric, no gas, no emissions, the perfect car for me! I’ve driven around a little and love it! It is so quiet, spunky, and roomy. I would not say I am happy for the crash, because now we have a new car payment, but I am happy that God takes bad situations and turns them around.

One thought on “Crashing Head On Into The Future”

The Far Reaches of Grace

The Far Reaches of Grace